We’re Not Going Back to Normal To stop coronavirus we will need to radically change almost everything we do: how we work, exercise, socialize, shop, manage our health, educate our kids, take care of family members.

We all want things to go back to normal quickly. But what most of us have probably not yet realized—yet will soon—is that things won’t go back to normal after a few weeks, or even a few months. Some things never will.

It’s now widely agreed (even by Britain, finally) that every country needs to “flatten the curve”: impose social distancing to slow the spread of the virus so that the number of people sick at once doesn’t cause the health-care system to collapse, as it is threatening to do in Italy right now. That means the pandemic needs to last, at a low level, until either enough people have had Covid-19 to leave most immune (assuming immunity lasts for years, which we don’t know) or there’s a vaccine.

How long would that take, and how draconian do social restrictions need to be? Yesterday President Donald Trump, announcing new guidelines such as a 10-person limit on gatherings, said that “with several weeks of focused action, we can turn the corner and turn it quickly.” In China, six weeks of lockdown are beginning to ease now that new cases have fallen to a trickle.

But it won’t end there. As long as someone in the world has the virus, breakouts can and will keep recurring without stringent controls to contain them. In a report yesterday (pdf), researchers at Imperial College London proposed a way of doing this: impose more extreme social distancing measures every time admissions to intensive care units (ICUs) start to spike, and relax them each time admissions fall.

Here’s how that looks in a graph. 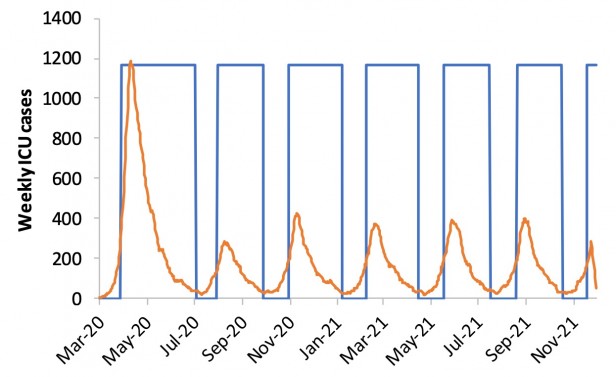 Periodic bouts of social distancing keep the pandemic in check.

The orange line is ICU admissions. Each time they rise above a threshold—say, 100 per week—the country would close all schools and most universities and adopt social distancing. When they drop below 50, those measures would be lifted, but people with symptoms or whose family members have symptoms would still be confined at home.

What counts as “social distancing”? The researchers define it as “All households reduce contact outside household, school or workplace by 75%.” That doesn’t mean you get to go out with your friends once a week instead of four times. It means everyone does everything they can to minimize social contact, and overall, the number of contacts falls by 75%.

Under this model, the researchers conclude, social distancing and school closures would need to be in force some two-thirds of the time—roughly two months on and one month off—until a vaccine is available, which will take at least 18 months (if it works at all). They note that the results are “qualitatively similar to the US.”

Eighteen months!? Surely there must be other solutions. Why not just build more ICUs and treat more people at once, for example?

Well, in the researchers’ model, that didn’t solve the problem. Without social distancing of the whole population, they found, even the best mitigation strategy—which means isolation or quarantine of the sick, the old, and those who have been exposed, plus school closures—would still lead to a surge of critically ill people eight times bigger than the US or UK system can cope with. (That’s the lowest, blue curve in the graph below; the flat red line is the current number of ICU beds.) Even if you set factories to churn out beds and ventilators and all the other facilities and supplies, you’d still need far more nurses and doctors to take care of everyone. 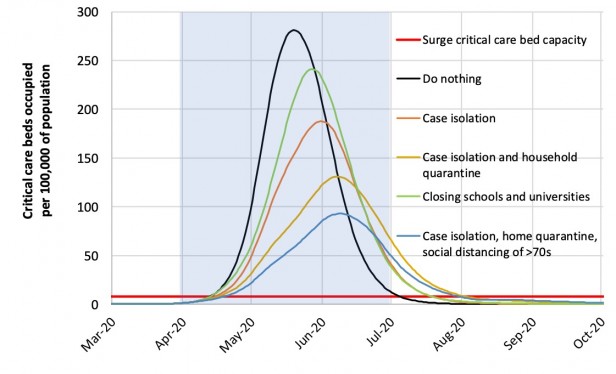 In all scenarios without widespread social distancing, the number of COVID cases overwhelms the healthcare system.

How about imposing restrictions for just one batch of five months or so? No good—once measures are lifted, the pandemic breaks out all over again, only this time it’s in winter, the worst time for overstretched health-care systems.

If full social distancing and other measures are imposed for five months, then lifted, the pandemic comes back.

And what if we decided to be brutal: set the threshold number of ICU admissions for triggering social distancing much higher, accepting that many more patients would die? Turns out it makes little difference. Even in the least restrictive of the Imperial College scenarios, we’re shut in more than half the time.

This isn’t a temporary disruption. It’s the start of a completely different way of life.

Living in a State of Pandemic
In the short term, this will be hugely damaging to businesses that rely on people coming together in large numbers: restaurants, cafes, bars, nightclubs, gyms, hotels, theaters, cinemas, art galleries, shopping malls, craft fairs, museums, musicians and other performers, sporting venues (and sports teams), conference venues (and conference producers), cruise lines, airlines, public transportation, private schools, day-care centers. That’s to say nothing of the stresses on parents thrust into home-schooling their kids, people trying to care for elderly relatives without exposing them to the virus, people trapped in abusive relationships, and anyone without a financial cushion to deal with swings in income.

There’ll be some adaptation, of course: gyms could start selling home equipment and online training sessions, for example. We’ll see an explosion of new services in what’s already been dubbed the “shut-in economy.” One can also wax hopeful about the way some habits might change—less carbon-burning travel, more local supply chains, more walking and biking.

But the disruption to many, many businesses and livelihoods will be impossible to manage. And the shut-in lifestyle just isn’t sustainable for such long periods.

So how can we live in this new world? Part of the answer—hopefully—will be better health-care systems, with pandemic response units that can move quickly to identify and contain outbreaks before they start to spread, and the ability to quickly ramp up production of medical equipment, testing kits, and drugs. Those will be too late to stop Covid-19, but they’ll help with future pandemics.

In the near term, we’ll probably find awkward compromises that allow us to retain some semblance of a social life. Maybe movie theaters will take out half their seats, meetings will be held in larger rooms with spaced-out chairs, and gyms will require you to book workouts ahead of time so they don’t get crowded.

Ultimately, however, I predict that we’ll restore the ability to socialize safely by developing more sophisticated ways to identify who is a disease risk and who isn’t, and discriminating—legally—against those who are.

We can see harbingers of this in the measures some countries are taking today. Israel is going to use the cell-phone location data with which its intelligence services track terrorists to trace people who’ve been in touch with known carriers of the virus. Singapore does exhaustive contact tracing and publishes detailed data on each known case, all but identifying people by name.

We don’t know exactly what this new future looks like, of course. But one can imagine a world in which, to get on a flight, perhaps you’ll have to be signed up to a service that tracks your movements via your phone. The airline wouldn’t be able to see where you’d gone, but it would get an alert if you’d been close to known infected people or disease hot spots. There’d be similar requirements at the entrance to large venues, government buildings, or public transport hubs. There would be temperature scanners everywhere, and your workplace might demand you wear a monitor that tracks your temperature or other vital signs. Where nightclubs ask for proof of age, in future they might ask for proof of immunity—an identity card or some kind of digital verification via your phone, showing you’ve already recovered from or been vaccinated against the latest virus strains.

We’ll adapt to and accept such measures, much as we’ve adapted to increasingly stringent airport security screenings in the wake of terrorist attacks. The intrusive surveillance will be considered a small price to pay for the basic freedom to be with other people.

As usual, however, the true cost will be borne by the poorest and weakest. People with less access to health care, or who live in more disease-prone areas, will now also be more frequently shut out of places and opportunities open to everyone else. Gig workers—from drivers to plumbers to freelance yoga instructors—will see their jobs become even more precarious. Immigrants, refugees, the undocumented, and ex-convicts will face yet another obstacle to gaining a foothold in society.

Moreover, unless there are strict rules on how someone’s risk for disease is assessed, governments or companies could choose any criteria—you’re high-risk if you earn less than $50,000 a year, are in a family of more than six people, and live in certain parts of the country, for example. That creates scope for algorithmic bias and hidden discrimination, as happened last year with an algorithm used by US health insurers that turned out to inadvertently favor white people.

The world has changed many times, and it is changing again. All of us will have to adapt to a new way of living, working, and forging relationships. But as with all change, there will be some who lose more than most, and they will be the ones who have lost far too much already. The best we can hope for is that the depth of this crisis will finally force countries—the US, in particular—to fix the yawning social inequities that make large swaths of their populations so intensely vulnerable.